I have been reading online over the past few weeks about how during the COVID-19 pandemic people are reporting having strange, vivid dreams. As to why this is happening, theories abound, but one of the more interesting theories is that withdrawal from our usual environments (caused by the quarantine) has left many subconscious brains searching back into the lost stacks of the mind for inspiration. The past, for many, is being dug up, and played out in new formulations while they sleep. How fascinating, I thought as I read, The dreaming mind is such a deep, welling place.

That got me thinking about sleeping in general, and all the mystery that entails it. My own sleep has always been plagued by oddities, from having Night Terrors in my youth to run-of-the-mill somnambulism to a terrible case of Exploding Head Syndrome I got in my mid-twenties. My immediate thought was I should get a book on it from the library, ride the wave of my sudden interest, before I was triggered by the remembering that I, in fact, already own a book about sleep and its many variations, and had never gotten around to reading it.

So to my small-ish Tsundoku collection I went, and pulled from the back of my shelf Dreamland: Adventures in the Strange Science of Sleep by David K. Randall. A rather journalistic endeavor and easy reading, Randall’s book was a fun, intriguing exploration into what happens (and what can happen) when we lay our heads down at night. A little lacking in imagination but clear cut on facts and a good dose of wit to it, Dreamland is a good beginner’s guide to the strangeness of slumber and the nebulous workings of the unconscious mind. 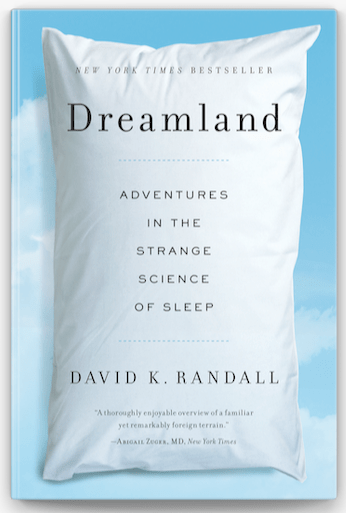 “Whether any of us has a sleep problem or not, it is clear that we are living in an age when sleep is more comfortable than ever and yet more elusive. Even the worst dorm-room mattress in America is luxurious compared to sleeping arrangements that were common not that long ago. During the Victorian era, for instance, laborers living in workhouses slept sitting on benches, with their arms dangling over a taut rope in front of them. They paid for this privilege, implying that it was better than the alternatives. Families up to the time of the Industrial Revolution engaged in the nightly ritual of checking for rats and mites burrowing in the one shared bedroom. Modernity brought about a drastic improvement in living standards, but with it came electrical lights, television, and other kinds of entertainment that have thrown our sleep patterns into chaos.’ […]

“Because of the number of new findings in such a short time span, today’s researchers believe that they are in a golden age of their field. Sleep is now understood as a complex process that affects everything from the legal system to how babies are raised to how a soldier returning from war recovers from trauma. And it is also seen as a vital part of happiness. Whether you realize it or not, how you slept last night probably has a bigger impact on your life than what you decide to eat, how much money you make, or where you live. All of those thing that add up to what you consider you–your creativity, emotions, health, and ability to quickly learn a new skill or devise a solution to a problem–can be seen as little more than by-products of what happens inside your brain while your head is on a pillow each night. It is part of a world that all of us enter and yet barely understand.”

It was neato to learn that Randall’s interest in the hidden elements of sleep were prompted by his own experience of sleepwalking. Always more of a talker in his sleep than a walker, David K. Randall woke up one night on the floor of his hallway, having no recollection of how he’d gotten there. Obviously, he’d been sleepwalking, but he’d never done it before and was baffled by what had happened, and slightly concerned it would happen again. When he sought out a specialist, a neurologist, all he received was an answer that led to more questions. The neurologist told him plainly, “I’m going to be honest with you. There’s a lot that we know about sleep, but there’s a lot that we don’t know. If the sleepwalking continues, let’s try some sedatives. But I don’t want you to start taking drugs that you don’t need. Try to cut down on your stress and see what happens.” And that was that.

But being a reporter, Randall couldn’t just leave it at that. So began his adventures into the weirdness of sleep. Though the science was still in its infancy when Dreamland first appeared on the shelves in 2012, and hasn’t come that far since, Randall touches upon all sorts of topics, from Freudian and Jungian theories of our dreams, to criminal acts committed by sleeping individuals, to baseball stats, Randall’s book is a wonderland of fascinating discoveries and entertaining trivia.

The book is 13 chapters, the first opening with Randall’s own bizarre encounter with his unconscious self that left him confused and dazed on the floor, to closing up shop with a fruitful experiment to see whether he could, as it were, brain-hack himself to a better night’s rest. Very readable and easy to follow, Dreamland is articulate and streamline. Choosing to touch upon as many subjects as he can instead of going into expansive depth of any one or two, the book has a jack of all trades feel to it that keeps it light, and keeps the pages turning. The information gained tastes a great deal more like data than knowledge, and that’s just fine, and Randall has a charming sense of humor that adds a component of warmth to the book, even in the drier bits. A reader is sure to find something that interests them, and sure to learn some new amount about sleep. My favorite chapters where “Between The Sheets”, “Game Time”, and “Breathe Easy”, mostly due to the surprising socio-economic turns they took that had never much graced my mind.

Speaking of my mind, Dreamland was certainly a book that got me thinking about my own inner mechanics. Recently, I learned about an area of the brainstem called the PONS which regulates respiratory and sensory functions, and is in fact the little switch that turns off our motor functions while we sleep. But for those of us who are somnambulists (sleepwalkers), our PONS areas frequently decide not to turn off when the lights go out, and we are left running around and acting out our dreams, so many of us waking up cooking sunny-side eggs, stumbling on stairs, or completely prone on our living room floors. It got me thinking, What disrupts this? Why some and not so many others? The clockwork of the mind is a fine, intricate machine that loves to suddenly sproing springs. Much like many other mysteries, sleep is an entity who when answers a question is poised to ask twenty more.

And that’s the review. A good enough read that taught me new things, got me thinking, and helped satiate my curiosity on the recent coronavirus pandemic dreams going around. David K. Randall’s Dreamland: Adventures in the Strange Science of Sleep gets three out of five stars.

The featured image is Frederic Leighton’s “Flaming June” produced in 1895. Painted with oil paints on a 47-by-47-inch (1,200 mm × 1,200 mm) square canvas, it is widely considered to be Leighton’s magnum opus. “Flaming June” disappeared from view in the early 1900’s and was rediscovered only in the 1960’s. It now resides at the Museo de Arte de Ponce in Ponce, Puerto Rico, via Wikipedia – Thank you.

7 thoughts on “Dreamland: Science and Musings on Sleep”