When one thinks of folklore it is unlikely the considered would include the United States. More likely candidates would be the isles of Great Britain and Ireland with their abundant fairy faith traditions, or perhaps Malaysia, with its spectacular wealth of ghosts and spirits. The folklore of North America, in most minds, tends to lean toward Mesoamerica and that of Native American or Mayan culture, before the Europeans came and (supposedly) sucked all the good stories out.

It’s hard to argue against this perspective; it would appear Americana was less into creating its own lore and fables and more into borrowing from other traditions. This is no doubt due to the melting-pot—but, a few interesting ones stand out. The Jersey Devil of the Pine Barrens; the mischievous spirit of northern Wisconsin, the Hodag; the red Demon of the Straight, Nain Rouge, of Detroit; the Bell Witch Haunting of Tennessee; of course, there is Bigfoot. A lot of USA folklore exists inside urban legends, those scary stories told at sleepovers with a bag of potato chips and a flashlight tucked near the chin. Strangely, clowns dominate in this arena of tale telling, as every kid who grew up in the Midwest knows the spooky meaning behind the rather confusing idiom, “Clowns can lick too.” The myth and legends of the USA can no doubt present a bit of a challenge to the classical folklorist.

But there is a period of USA history that is indeed loaded with folklore and tall tales. Colonial America, surprisingly, has an enormous body of writings that have survived and remain an engaging treat to any folklorist or investigative individual interested in the study or dabbling of folkloristics.

And here enters fiction; colonial America is a particularly uncharted land. After all my years of reading, I can say that the amount of authors I’ve read that chose to plant their flag in colonial America is quite small. Usually when it happens, it is an indulgent romp of semi-historical account involving romance of some kind, or, it is the Salem Witch Trials. Either way, the pickings are slim. Passing through the bookstore, I spotted a red paperback with an eerie design of pale clutching hands circling a wolf’s head. Gravitating towards it, once it was in my fingers I flipped it over to find the words “this magical and frightening tale of colonial America” and I spanked it to my friend immediately, saying, “Wow, colonial America, something for you!” He bought it promptly, and about a month later, I got to sink my teeth into In The House In The Dark Of The Woods by Laird Hunt.

Narrated in the first person, the small novel opens on a young married woman searching for berries out in the forest by her humble home. Already, In The House In The Dark Of The Woods has the distinctive feel of a fairy tale. Quickly over the next few pages our protagonist becomes lost; darkness swiftly skates into the tall trees; our confused and increasingly frightened heroine desperately tries to find her path back, to no avail. Her mind wanders, her thoughts and memories move in and out. Through a progression of events, she finds herself laid up in a mysterious house, somewhere in the dark and wending wood. A woman named Eliza who lives there tends to our lady’s bruised and battered feet. But there is more to Eliza than meets the eye, and soon the darkness itself begins to speak. 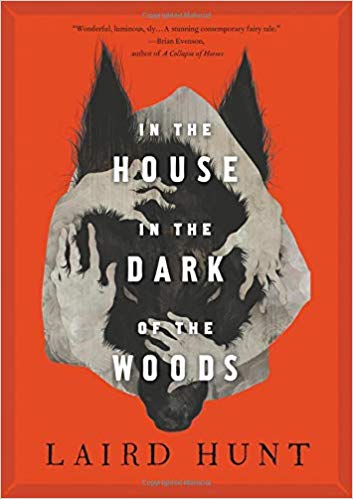 [..] It came in a chorus this time, from the front room and outside the window, yes, but now also from other places: from down in the root cellar under the wood plank of the floor where Eliza did her scratching, from the ceiling boards, from the chimney shaft, from the walls, even from my own room. Who is moaning in my room? I thought. Is it me or is it Eliza? Only here I was and here was she. The moaning stopped. “Eliza,” I said. But she did not move at the sound of my voice any more than the Eliza in the front room had. “Eliza,” I said again, more loudly, and though the shape in the bed before me stayed silent, the moan sounded alone once more.

It came from farther down the hall, from a room I had not yet entered. I took Eliza’s candle with me for there was no light or very little by this door. I stood before it for what felt like a long time. At last I pulled at the latch and held up the candle and there lay Eliza curled on the floor. A smell of wet and burning both came toward me. Her eyes were open. She was looking at me.

“You should go and rest now, Goody,” she said.

“In the house in the dark of the woods.”

It took me some time to like this book. There is a heavy lag in the former-middle of the text that leaches hard at the attention span; however, luckily this drag does not last for long. Laird Hunt’s writing is extremely paced, though occasionally, a blade of beautiful prose slices through, and the style and function is very much like those of colonial writings, giving the novel a genuine feel that fits the period. The story itself tumbles more like poetry, as if Hunt were feeling out the bottom of a murky pool with his toes. With a smart slash of Magic Realism in the signature, the main element of the book is nebulous, evading stringent categories and strict lessons. Laird Hunt seems to be exploring what most fairy tales—modern and old—seek to accomplish: a way of navigating and understanding the dangers and cruelties of the world, safely. Affection and abuse, confinement and freedom, respect and shame are just some of the binaries Hunt traverses on his journey. Our three main characters, Eliza, Captain Jane, and Goody, are all women of tragedy, and rather grimly, Laird Hunt tells their conflicting tales through a combination of metaphor, fabulism, historical fact, and perhaps most of all, memory.

Disquieting at parts but mostly just brow raising, In The House In The Dark Of The Woods is plump with fantastical imagery. Intersecting timelines, astounding insect swarms, flying boats, frightening transformations, a bird with massive human arms, Hunt’s imagination comes in force. That said, often times the force feels just that–forced. It seems that the storytelling itself—the fleshing of characters, the intents of events, the never-ending road of internal dialogue—was left to the wayside as Hunt plowed his pen into his inkpot, determined to make the strange stranger and the magical more magical. It leaves a book that is full of pain, mystery, and resurrection oddly hollow. Reading In The House In The Dark Of The Woods was like going through Samsara, a repetition of circumstances and a square dance of trading places that at best leads to little further understanding and at worst to head-scratching confusion. The scenes are phantasmagoric, the enchantment at times wonderful if not also jarring. But Laird Hunt, so very determined it would seem to be as elusive as he can, gives little to hold on to. The reader is left with a handful of soot, and the novel is quickly lost to the back of the shelf before being hauled out to be exchanged for some credit at a secondhand bookstore.

Nevertheless, there are some bright parts. Chapters 18 through 25 are particularly engaging. For a book of 28 chapters and an epilogue, its a promising show of writing. Hunt is at his best when he gets out of his own head and into the moment. When given a character and a sole perspective, Hunt’s writing flounders, as though he were attempting to build a house on stilts without proper anchoring. But put that character into motion, have them interact with the characters and world around them—damn, then Hunt delivers. Often times the dialogue In The House In The Dark Of The Woods (and there is quite a lot) is like reading an author playing ball with himself. But given some patience, Laird Hunt proves himself to be a capable writer. For a moment, a reader can almost forget all the slosh they slugged through to get there. For a moment, Hunt breaks into something great.

All and all, Laird Hunt’s seesawing fairy tale of colonial America is a fine read. A good writer, and a good enough storyteller, Hunt has woven a vibrant, detailed tapestry, and though the expression of light and color would seem to outweigh the precision of the needlework, it is still a beautiful piece of art. Give yourself three afternoons, drink it in; a reader can no doubt be swept away by Hunt’s occasional stunning verse or a rolling dynamic scene. Muscle through the mucky parts, and make it to the final page. I thought it was worth it, so hopefully, you will too.

3 stars for Laird Hunt’s colonial folktale In The House In The Dark Of The Woods.