In a castle, deep in the Romanian wilderness, five sisters have a secret.

From eldest to youngest, sisters Tatiana, Jenica, Paula, Iulia, and little Stela, by way of a hidden door in their bedchamber, depart to another world each and every full moon.

Dressed in their best, the young’uns go dancing. But not with boys—oh no. Oh no not with fellow young boys. These girls go out partying with dwarves and trolls, with fairies and beasts and other magical forest folk. Free-spirited Iulia spins and spins until her face gets red; elegant and beautiful Tatiana sways serenely, her cascade of black hair tilting on her head; bubbly Stela jumps and jigs with her tiny woodland friends; Paula does not dance, but discusses her studies—at a table with robed academics while the music plays—enthusiastically expounding her writings and theories.

With her best friend Gogu (who so happens to be a frog) she observes more than she dances, watches over more than she joins. Are her sisters safe? Is there trouble nearby? Jena understands the Other Kingdom can be a dangerous place, so she keeps her wits about her, keeps track of the time, keeps tabs on all her siblings and makes certain that everything goes smoothly and that everything is fine.

The girls pay their respects to Ileana, the fairy queen of the wildwood, and then set off again across the Bright Between. On five boats uniquely shaped—swan, wyvern, phoenix, wood duck, and salamander—they return to their bedchamber in the early morning, sleepy eyed and full of new daydreams. Their secret secure, their secret still secret.

But secrets have an animation about them. Like young girls, no matter how hard we try to keep them out of harm’s way and keep them locked up, secrets have a way of sneaking off. In a series of unexpected events, the sisters’ lives change. The wildwood holds secrets all its own, and seeds planted long, long ago start to take root. Jena tries with all her might to maintain the order, to keep the two worlds divided and to keep her sisters safe; but the forest has other plans, and the magic around her and within her is set to fly—no matter what she has to say about it. 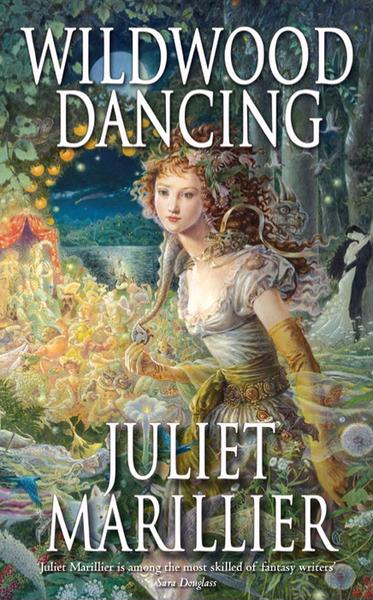 The long room we sisters shared had four round windows of colored glass: soft violet, blood-red, midnight-blue, beech-green. Beyond them the full moon was sailing up into the night sky. I put Gogu on a shelf to watch as I took off my working dress and put on my dancing gown, a green one that my frog was particularly fond of. Paula was calmly lighting our small lanterns, to be ready for the journey. […]

“Come on,” Iulia urged. “My feet are itching for dance.”

The first time we had done this, in our earliest days at Piscul Dracului—when I was only six, and Stela was not yet born—Tati and I had been amusing the younger ones by making shadow creatures on the wall: rabbits, dogs, bats. At a moment when all our hands had been raised at once to throw a particular image on the stones, we had found our forest’s hidden world. Whether it had been a chance or gift, we had never been sure.

An excellent YA fairy tale, Wildwood Dancing starts the party early and doesn’t let up. Juliet Marillier (who, according to her bio, sounds just as magical as the books she pens) is skilled in her abilities, deftly weaving enchantment and mystery and bringing to life well-wrought characters and magical scenes. Taking the very popular folk tale of “The Twelve Dancing Princesses” Marillier leaves behind its traditional German roots and takes it for a spin out in Romania. A bit of a Rubik’s Cube, the book kicks off right away and doesn’t take unnecessary amounts of pages getting to all the juice: tall, dark, and handsome strangers, danger and intrigue, mythical beings, adventure, wild and sudden emotions, and of course, lots and lots of dancing.

With a handy-dandy glossary in the back and a guide to help with difficult pronunciations, the book feels hale and hearty, and a reader can quickly fall into another world.

Fairy tales are popular in YA right now. Ever since women started getting their hands on them, there’s been an eagerness to flip the script. And why wouldn’t there be? No longer willing to be passive victims in their own stories, women insist on a different kind of tale, a tale that involves autonomy, action, and liberation, the inner narratives of young women and girls at last spilling free.

It’s not all good, of course. What reader hasn’t found herself rolling her eyes at overused tropes and ham-fisted scenarios where our heroine shouts, “NOT TODAY, BUCKO!” and kicks comically sexist Evil von Baron Le Pué to the curb while seizing a kiss from the equally preposterous non-sexiest Bad Boy Edward Hot Pants and then using her super powers to blast a sunbeam into the sky to exemplify her extraordinary abilities to overcome all things m-a-n while at the same time riding off into the sunset with one. It can get tiresome, all the mentally ill girls who are secretly psychic or have telekinetic powers, who are not the pretty ones because they are “too skinny” and/or have “wild hair” and are “clever”. It doesn’t fall on deaf ears that YA has problems. But it should also not fall on deaf ears that YA has a lot to offer, and has in fact offered it in abundance. Simply put, perhaps YA has garnered most of its bad reputation over the years on its slow cultural and societal formation into “a girl’s genera”.

So in summary, Wildwood Dancing might be a difficult book to get your son to read. The characters are overwhelmingly female (which can, sadly, be enough of a deterrent) and the tale itself feels traditionally feminine. But books, ultimately, do not have sex nor gender. Wildwood Dancing is a wonderfully told tale about truth, love, and the courage to believe in yourself. It is fun, exciting, and undoubtedly at times titillating (this red blooded woman will admit to some flushed cheeks) and there’s certainly enough fantasy to keep you interested. The sisters are all versatile, flawed, and contain their own desires and dreams. Juliet Marillier does an excellent job of bringing real life struggles to the fore, and just as gracefully guides readers through them, not shunting on painful conflicts and that sometimes human beings don’t get things right; however, with some planning—and some guts—Marillier reminds that we can fix what’s been wronged, and that stumbling is just a part of living.

Read Wildwood Dancing. Why not? Unless you can’t find it. Jump into your boat (your car), sail the Bright Between (your street), get yourself to the Other Kingdom (your local library), and remember, life is a dangerous wildwood.

Four out of Five Stars for Juliet Marillier’s Wildwood Dancing.

All images are sections of Kinuko Y. Craft’s truly spectacular cover art. Find more of her artwork at http://www.kycraft.com

One thought on “Wildwood Dancing: A Romanian Fairy Tale”