If you’re like me, you wonder what happened to the supposed coming convictions of the top bankers from the top firms after the 2008 financial crisis. Not a single person went to prison. The recession was a meteor that slammed into the United States at 13 km per second, creating an upheaval of the financial system and rolling us into a dark hole that at the time felt 6 feet deep. Coming to the aid of the quivering industries, the government tossed out bailouts like a float chucking out candy at the Macy’s Thanksgiving Day Parade. With the malfeasance of the financial firms well documented, and the reek of guilt emanating from every pore, you probably waited just as I did for the prosecutorial gavel to slam down. And oh, we waited—oh did we wait. We waited so long some of us sprouted grey hair and were closing in on grandkids. What was the Justice Department doing? Why the feet dragging? The papers wanted to know, the people wanted to know. When the trickle of deferred prosecution agreements came in, the rage came in too; the Charging Bull was descended upon by millions of confused, angry Americans. One of the largest movements of the current era, Occupy Wall Street, flooded big cities. To put it in everyman terms: People were hopping mad.

Then, par for the course of the modern day, the rage died. The social media feeds moved on, the executives walked scot-free; however, the landscape of America was forever changed.

So what the hell happened? “I waited for the government to charge bankers with criminal wrongdoing. And waited. The indictments never came.” writes Pulitzer Prize winning journalist Jesse Eisinger.

The Chickenshit Club: Why the Justice Department Fails to Prosecute Executives is Jesse Eisinger’s exhaustively researched gamut of just that: Why the indictments never came. Like many of us, the lack of action from the Justice Department nagged at him. Being a journalist, Eisinger began turning over stones. He came to find ( as most things are) the truth to be complex and winding. Even so, one word clearly did stand out in his mind as to why the Justice Department had failed. A fragment in a speech by James Comey, given in 2002 to the criminal division of the Southern District of Manhattan after being appointed the fifty-eighth US attorney by then-President George W. Bush, summed up Eisinger’s feelings perfectly. 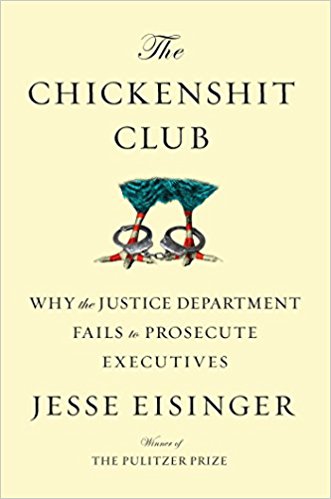 “Before we read off the box score, I have something to say,” Comey said. “We have a saying around here: We do the right things for the right reasons in the right ways.”

All the assembled prosecutors had heard that exhortation in some variation, from Comey in the hallways or in smaller meetings, and from other chiefs.

Then Comey asked the seated prosecutors a question: “Who here has never had an acquittal or a hung jury? Please raise your hand.”

The go-getters and résumé builders in the office were ready. This group thought themselves the best trial lawyers in the country. Hands shot up.

“Me and my friends have a name for you guys,” Comey said, looking around the room. Backs straightened in preparation for praise. Comey looked at his flock with approbation. “You are members of what we like to call the Chickenshit Club.”

Hands went down faster than they had gone up. Some emitted sheepish laughter.

The aforementioned complex and winding truth, though unable to be boiled down to one concentrated point of fault, could in fact be summarized: ‘Cowardice’, Jesse Eisinger found, plagued the Justice Department. After Comey’s compelling speech, ironically, a trend began. The well-dressed, well-educated, and well-groomed lawyers of the DOJ over and over again failed to bring any charges against executives involved in white-collar crime. As a snail confronted with salt, the department shriveled up. Deference became the norm. No one was willing to bring executives to court for fear that they might lose.

Eisinger has written a good book. The bureaucratic game boards are well laid out, the accounting jargon followable. Eisinger starts at the beginning, building a history, telling the story of when, where, how, and why through a compelling timeline starting around the Enron trials and ending near the dusk of the lackluster Yates memo. The United States government has become more and more pro-business—this is no revelation. What is impressive, however, is Eisinger’s incredibly provocative and detailed report. The pile of evidence he pushes forward is eyebrow raising. What Eisinger presents isn’t just capitalist culture bleeding into government; what Eisinger presents is a full occupation. The Fat Cats have sunk their claws in deep, and our government doesn’t appear eager to shake them off.

The events leading up to the present day milquetoast-ridden DOJ and SEC Eisinger documents in detail. Death in the body politic doesn’t happen with a single thrust; it happens through dozens and dozens of tiny stabs from legalese and lobbying, spins and promotions, bloated incentives and revolving doors. From the 1971 Powell memo, to the debacle of the Arthur Andersen trial, to the “namby-pamby” settlements of AIG and KPMG, to the reversal of the Thompson memo, to the loss of investigative ability within the DOJ and SEC, to the arrival of “the Obamanauts”, to the misguided ruling of Judge Lewis Kaplan and to the ostracism of the corporate boogiemen Stanley Sporkin, Paul Pelletier and Judge Jed Rackoff, the demise of the prosecution was made. A pipeline from big business progeny to esteemed colleges was built; the prosecutorial means in which to pursue investigations were gutted; 9/11 hit, and the resources dried up, sent to the DOD to battle terrorists, both real and imaginary. All these things, compounding through the vastly shifting world landscape, dealt a thousand small blows, and the DOJ went down like a sack of hammers. For the white-collar criminals, it is a Gilded Age. For them, never has there been a more freewheelin’ time to be alive.

To read the newspaper today is to be in a constant state of disappointment. So it is in reading The Chickenshit Club. It is evident the governmental systems that have stood strong for centuries are now becoming relics on a planet that is rapidly evolving. The people and the technologies are outpacing the laws. A surprising statistic: About 91% of all currency exists only in digital form. In Jesse Eisinger’s words, understanding tax fraud is like translating “Aramaic into Mandarin back into English.” The world of white-collar crime can feel so daunting, even to the most well-versed of veterans, but we must keep up. The boom/bust cycle roars on, and so must justice.

Jesse Eisinger has put an important book into the public sphere. Though the plops of dropped balls can still be heard on any given day, there is one good thing to take away: Somewhere there’s a journalist, picking up bread crumbs, turning over stones. Though the Rolls-Royce driving criminals and Windsor knot wearing lawyers might skirt the courts, it’s nice to think that maybe, when they’re at their dining-room tables having morning coffee, they’ll pick up the paper, and see their name printed in black ink, beneath a headline that says something like this:

Four out of five stars for Jesse Eisinger’s The Chickenshit Club: Why the Justice Department Fails to Prosecute Executives.

One thought on “Milquetoasts: Jesse Eisinger Explains Why the Justice Department Fails to Prosecute Executives”